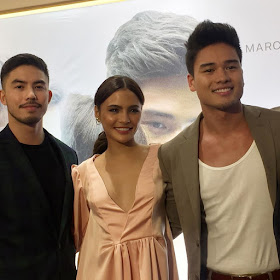 LOVI POE is thankful that Regal, with whom she has a contract, has agreed for her to do a movie with Viva, “Hindi Tayo Pwede”, which is now slated to be shown on March 4. This love triangle movie also gives her the chance to work with two new leading men, Marco Gumabao and Tony Labrusca, who are both Kapamilyas when she’s a Kapuso. So how is it working with them?

“Pareho silang masarap katrabaho,” she says at the movie’s presscon at Botejyu Fisher Mall last Saturday night. “They both showed the right emotions required in every scene. First time ko to act with both of them and it’s superfun kasi pareho silang maalaga.”

She has love scenes with both of them. How is it? “They’re both gentlemen. Si Marco, nakasama ko na sa ilang shows and campaigns and this is our first movie. He plays my best friend, Dennis. Si Tony naman plays Gab, my boyfriend, kaya lang, may nangyari sa kanya before our wedding.

How would she rate them in doing love scenes? Is there a difference between the love scenes she did with each of them?

“I find it naman so awkward to rate them. Parang hindi yata fair to compare them with one another. Sa story kasi, iba ang level ng pagmamahal ko sa kanila. Kasi you cannot give the same kind of love twice. Basta rito, sa love scenes, you have to make the audience feel that it’s done out of love. Magkaiba ang theme songs nila, e.

"For Tony, it’s ‘Never Ever Say Goodbye’ and for Marco, it’s the title song ‘Hindi Tayo Pwede’ by the Juans. Yung love scene with Tony, slow and romantic. With Marco, more upbeat kasi we both didn’t expect na in love pala kami sa isa’t isa. I’m just grateful to be given the chance to work with such fantastic actors.”

How would she describe “Hindi Tayo Pwede”?

“I’m really excited with this movie and so proud of it kasi it’s a very different kind of love story. As you can see sa trailer, si Tony is a ghost. Kasi I couldn’t let go of him, so hindi matahimik ang kaluluwa niya and he returns to me as a spirit, pero ako lang ang nakakakita sa kanya.

"Si Marco naman is very devoted to me as my best friend na matagal na palang may secret love for me, but he couldn’t express it kasi nga alam niyang kami na ni Tony.”

In her last movie, “The Annulment”, she also had sexy love scenes with Joem Bascon and some people are now calling her a sexy star. How does she feel about it?

“I don’t really think of myself as sexy. But I do sexy love scenes that are tastefully done, lalo na when the director is someone you can trust, like Director Joel Lamangan, who gave me my FAMAS best actress award for the movie ‘Sagrada Familia’.”

At this point, Direk Joel himself butts in: