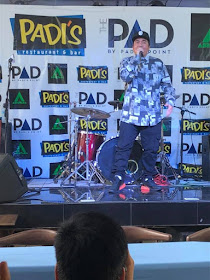 RAPPERS come and go but Gloc 9 has managed to stay on top. “I’m 23 years in the business now,” he says at the presscon of Padi’s Barkada Tour 2020 where he’s the frontliner. It’s really amazing how he managed to remain on the scene after two decades of rapping.

Gloc 9’s real name is Aristotle Pollisco and he started during the time of Andrew E. He was part of a rap group called Death Threat with OctoArts where they had several albums. Would he know where his colleagues during that era, Beware and HiJakk, are now?

Gloc 9 is known for his relevant songs about poverty and other social issues. He went solo but also collaborated with other top artists like the late Francis M, Rico Blanco, Parokya ni Edgar and Hale’s Champ Lui Pio. His hit songs include “Upuan”, “Sirena”, “Magda” and “Hari ng Tondo”.

His songs have been used in the soundtrack of various films, including “Trip”, “Jologs”, “Hari ng Tondo”. After OctoArts, he was with Star Music, Universal Records but now, he’s on his own as an independent artist. The last song he released as a single is “Halik”. How does he feel now that he’s being paired by Padi’s to do shows with younger artists like Shanti Dope, JKris, Lirah and alternative rock Sandiwa Band?

“It’s a great opportunity to work with today’s younger musicians,” he says. “When I was starting in the business, I was also made by Padi’s to join the company of more senior artists and I learned from them, so now I hope the new artists I’m performing with will also benefit from my own experience. We really want to thank Padi’s for their continuous support to local artists. Very memorable lagi ang tour nila sa dami ng kanilang locations, what with them now having 26 branches all over Luzon.”

Padi’s top honcho Vince Padilla is thankful that Padi’s is at the top of the industry as a restaurant and bar chain. “We’re the favorite venue for birthdays and other parties,” he says. “We’re also the favorite barkada hangout with our live bands plus food and drinks for the whole barkada like our signature 3-liter Padi’s Cocktail Towers.”

So why did they choose Gloc 9, Shanti Dope, JKris, Lirah and the Sandiwa Band to be their performers for the Bar Tour 2020?
“Since we’re the favorite hangout place of barkadas, inisip namin kung sino ang babagay sa tour na ito and these are the artists who we believe are perfect for our bar tour,” adds Padi’s marketing head Paolo de la Cruz.

“Gloc 9 is a rap icon, Shanti Dope has his own loyal fans, JKris is a Tawag ng Tanghalan discovery, Lirah is a hot rap acoustic princess with her hit single ‘May Sahod na Ba?’ and Sandiwa from Ivory Music has hits like ‘Gunita’ and ‘Paraya’, so no doubt barkadas will flock to their shows at Padi’s from February to June.”

We ask Lirah how she feels getting to work with Gloc 9? “I feel so blessed to be given the chance to do shows with him,” she says. “Napa-wow ako and felt sobrang amazed when I was told makakasama ko siya. Sobrang masaya ako, pero siempre, may pressure din kasi, Sir Gloc 9 yan, e. Dapat galingan ko talaga.”

How about the Sandiwa Band, which is composed of Yeoj Rivera, Harold Tabuno, Samuel Mopal, Jeremiah Torda and John Soriso?
“It’ll be a big challenge for us to perform with Sir Gloc 9 kasi mataas ang standards niya,” says Yeoj. “So we’ll do our best para makapantay kami sa kanya.”

You can check out the complete schedule of the Padi’s Barkada Bar Tour 2020 online at padispoint.com or on Facebook at padispointofficial.