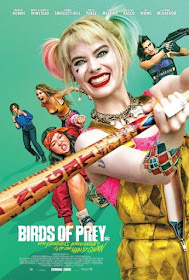 “Birds of Prey (and the Fantabulous Emancipation of One Harley Quinn)” is the follow up to DC Comics 2016 hit, “Suicide Squad” which introduced Margot Robbie as Harley Quinn, the sociopath girlfriend of the Joker (then played by Jared Leto.)  It’s an origin story introducing the back story of Harley and how DC Comics team known as Birds of Prey is formed.

Harley herself is the film’s narrator. After the Joker dumps her, Doc, a Chinese restaurant owner, helps her and she blows up the Ace Chemicals plant where she pledged herself to Joker. The movie then shows how she gets to join forces with Helena Bertinelli, Dinah Lance and Renee Montoya to rescue Cassandra Cain from the Gotham City kingpin, Roman Sionis aka Black Mask.

Helena (Mary Elizabeth Winstead of “Gemini Man”) is also known as the Huntress, the daughter of a gangster, Franco Bertinelli, who saw her entire family being massacred and now wants revenge. Dinah Lance (Jurnee Smollett Bell) is also known as Black Canary, a singer with the ability to do hypersonic screams that can demolish her enemies.

Renee Montoya (Rosie Perez) is an acerbic but dedicated detective of the Gotham City Police Department who wants to arrest Black Mask. Ella Jay Basco (who’s dad is Filipino) is Cassandra, a young Asian pickpocket who steals a rare diamond that Black Mask wants to get hold of as it contains the account numbers leading to the fortune left by the Bertinelli crime family. But she has swallowed the stone and Black Mask now wants to cut her up to get it back from her intestines.

The movie is directed by Cathy Yan and it succeeds in painting a complicated but engaging portrait of Harley Quinn as a supervillain in all her charismatic glory, combining riveting character development with spectacular action set pieces spiced up with woman empowerment.

The film is quite a blast, bursting with so much wit and energy, from the zippy opening up to the climax in an abandoned amusement park where the five girls join forces to take on the various bad guys who are running after them. This is a great celebration of combined feminine strength and women flexing their powers to help each other in a world messed up by men who keep on betraying them.

And it all works because through the highs and lows of her character, Margot Robbie just shines through in all the challenges that her candy-colored role requires her to do. Along with her flippant interpretation of the role, you can see she’s actually doing her own fight scenes.

Take note of that sequence where she wields a mean baseball bat with the fight scenes choreographed ala-John Wick. But she also shines in her comic scenes, like when she’s pining for a sumptuous egg sandwich with bacon that she treasures but which goes into waste during am action scene.

Robbie also stars in the currently showing “Bombshell”, playing a totally different role, and with her also memorable as Tonya Harding, we dare say she’s one of the most versatile young actresses working in Hollywood today.

She surely gets great support from Smollett Bell who fiercely shows off terrific action moves in her very physical scene as Black Canary, Winstead as the unfriendly Huntress who’s not equipped socially as she spent her whole life bent on having revenge with her crossbow, Perez as the suspended female cop who realizes she’s better off fighting crime on her own as a vigilante, and Basco as the teenage thief who brings them all together.

Also making his own mark is Ewan McGregor who seems to be having a ball as the ruthless but fastidiously costumed mob boss, Roman Sionis aka Black Mask.

It’s just too bad that the movie didn’t do as well as expected. We’re sure kids will enjoy watching its unbridled action sequences, but it’s got an R rating and also it opened at the height of the corona virus scare that scared people to go to movie theaters.

We hope it will still pick up so that these birds can continue to take flight and soar. There’s a post-credit sequence where Harley says she will reveal a secret about Batman but doesn’t continue it. We think this is a plug for the new Batman movie now being made with Robert Pattinson of “Twilight”. Here’s wishing it’d do better at the tills than this origin story of Harley Quinn.
mario at 2:04 PM
Share
‹
›
Home
View web version